In surf Open, the premier category of these France, the best surfer of the QS circuit has confirmed his presence! JorgannCouzinet , currently 7th in the provisional classification and who is aiming for the qualification for the CT at the end of November in Hawaii, will be the big favorite of this edition. Double champion of France in 2013 and 2014, Couzinet could well be delighted with a 3rd national crown. However, he will have a lot to do in Hossegor with in particular PVLaborde , winner here in 2017; but also VincentDuvignac always so formidable, even NelsonCloarec , a regular of the places. The threat could also come from Paul-CésarDistinguin , also used to QS games, or even from the Breton “veteran” IanFontaine . Champion of France, and of the world !, among the juniors, ThomasDebierre will also be a client in the conditions which promise to be tough.

Among the ladies, MaudLeCar returns to defend her title. Winner of the Caraibos Lacanau Pro this summer, she is the headliner of this edition alongside her runner-up CannelleBulard . The latter, a member of the France team at the ISA Worlds in September, will want to regain her title abandoned at Le Car last year. UhaïnaJoly and NeïsLartigue will be the two main outsiders in this category.

In hopeful surfing, a large part of the French junior team will take part in the championships this year. A few days before the ISA Worlds (October 26 - November 3), it will be a last gallop before the beach break at Huntington beach (USA). They are therefore present and to watch closely: NicolasPaulet , JustinBécret , TiagoCarrique , JulietteLacome , MaëlysJouault , NahiaMilhau and HinaConradi . Without forgetting the West Indian twins Thomas and NoéLédée .

In bodyboarding, AmauryLavernhe , triple world champion, is back in France. However, his participation remains suspended at the last stage of the APB world tour which started in the Canaries. MartinMouradian , double defending champion, and LauryGrenier are the two other seeds of this edition.
Holder of the title, ChristelleGiust will have to deal this year with the return of Anne-Cécile Lacoste , world champion in 2015. We will closely monitor the young IoneLopezManterola , who has just passed Open.

Antoine Delpero retired as promised after the Worlds in Biarritz (May), his brother Edouard will be the big favorite in longboard. Identical situation in the ladies where AliceLemoigne , ISA world champion, will defend her national title with the seeded label n.1.

After his first national success last year, BenoitCarpentier returns to Hossegor to retain his crown. He will once again have a lot to do with, in particular, his colleague from the France team AlexisDeniel .

The bodysurf category is certainly one of the most open with a compendium of great talents. World champion this summer in California, NathanLehoux will have as main rivals JoelBadina (defending champion) and JonathanDespergers, also world medalists.

Undisputed master of the kneeboard for years, JérômeBlanco is aiming for an 8th national title. He who remains on 6 consecutive victories.

The list of participants in Para Surf has not yet been communicated but there is no doubt that EricDargent , quadruple champion of France and double world silver medalist (AS2) will be there. Just like GwendalHalnaduFretay (AS6) who will also aim for a 5th national crown. PhilippeNaud and BenoitMoreau (AS1) who ignited La Gravière last year, should also be there. We also hope to see Katelle Michler-Ropert (AS5) back on the waves of her national title. 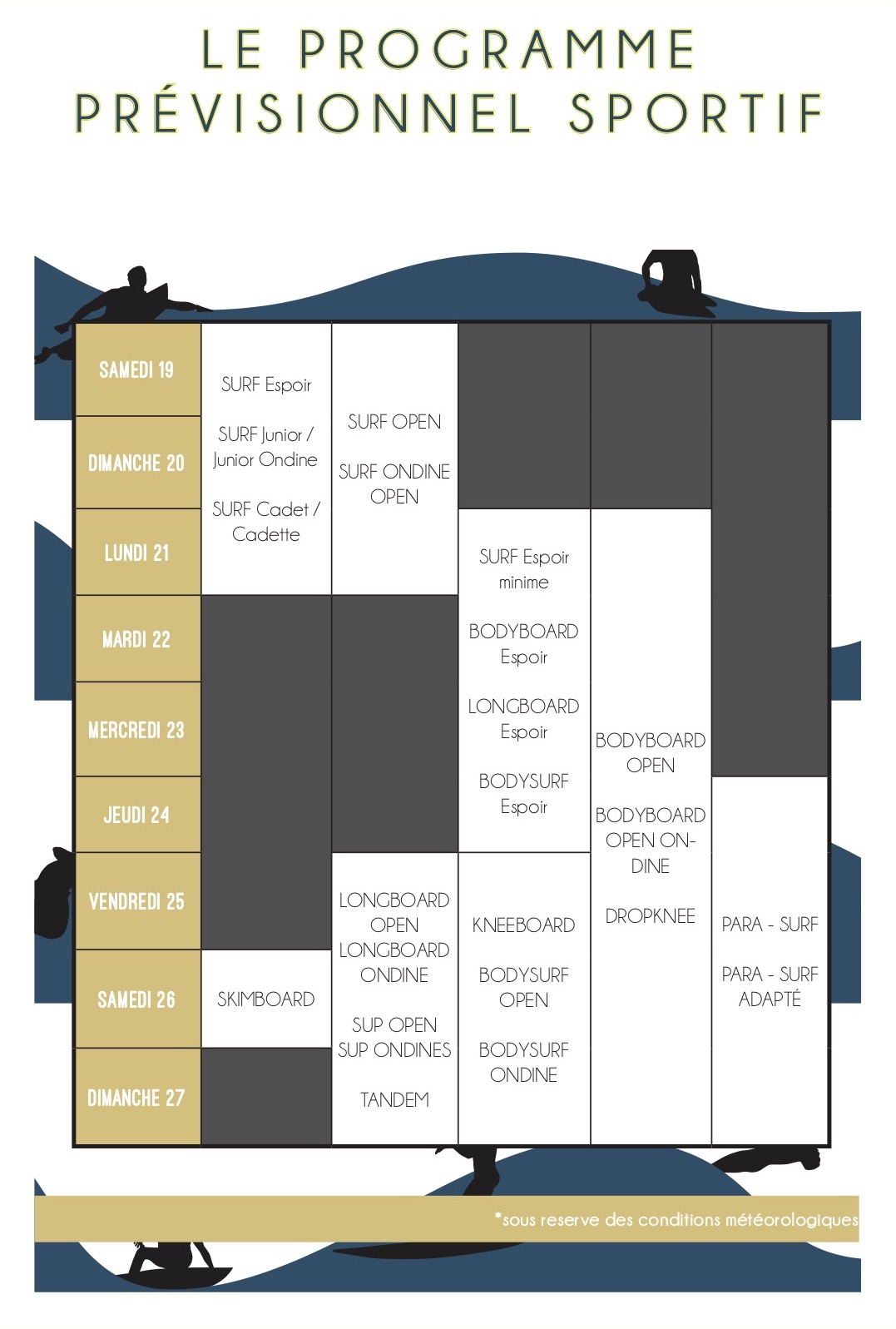 Accommodations near your activities offered by Booking.com & Airbnb

Accommodations near your activities offered by Booking.com & Airbnb