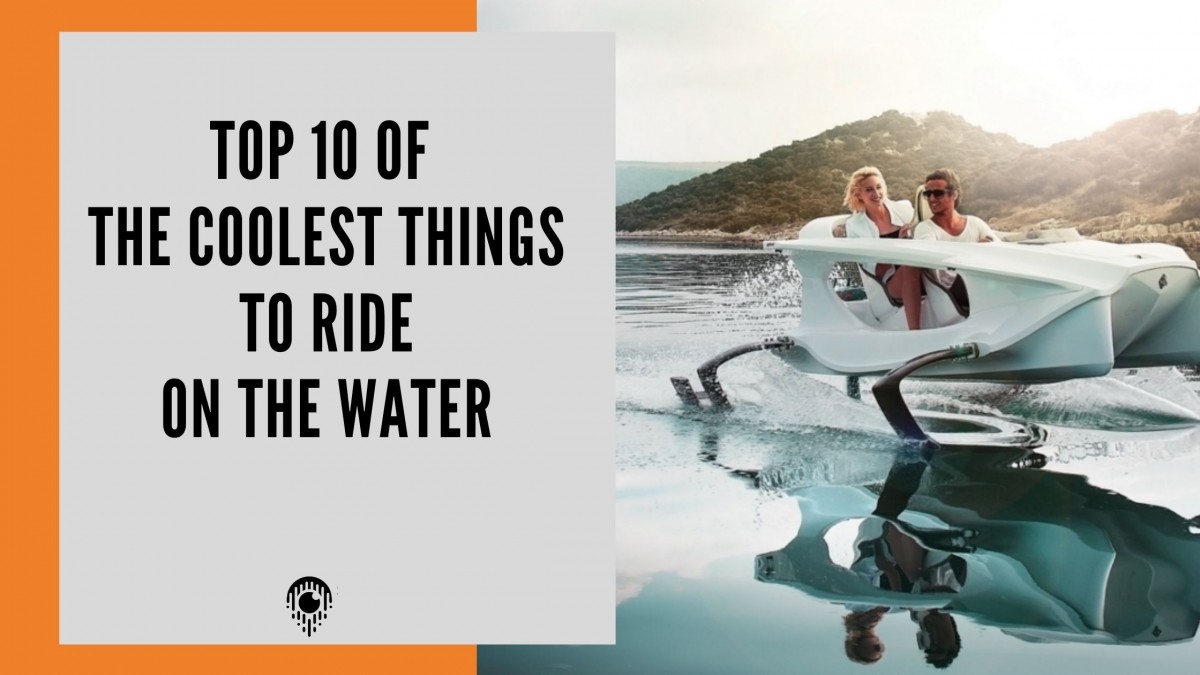 Top 10 coolest means of transportation on the water

We meet for our first top 10! Following the enthusiasm that there was on our e-foil article spotyride.com/blog/le-e-foil-la-technologie-qui-re-invente-le-surf I will make you discover other means of moving on the water.

It's a flying boat ! yes yes you heard right, he is skimming above water since it can rise up to six meters. If it can take off, it's not thanks to foils added under the boat, but via an aerodynamic phenomenon called ground effect or wing-in-ground. Equipped with a 500Cv engine, a V8, the airfish can reach 200 Km/h. The boat is developed by a Singaporean Company WigetWorks.  It is designed to carry eight people over 550 kilometers.  It's price is around 3,5 million $.

It is an electric "airplane", it weighs only 70 kg with a design concept that includes handcrafted manufacture, its body made of carbon composite makes it lighter than air, with 42hp it has the best weight ration / market power. The price of this Fynano is 40,000 dollars. This totally crazy mini plane is made for those who love speed and feel. Propelled in the air or on the water, you will feel the speed without any filter !

Quadrafoil was born from a visionary Slovenian company, which invented a whole new type of motorized marine vehicle, a cross between a jet ski and a boat. It is totally electric, it flies on water thanks to Hydrofoiling technology and allow economical and ecological navigation. Perfect for trips on the water, you will be well protected from the splashes because it is made to keep you dry. The Quadrafoils is silent and produces no waves. It was designed for navigation on lakes and rivers but it also suitable for navigation at sea in marine protected areas where most motor boats and jet skis are prohibited. It can reach a speed of 40 Km/h and its range is 100km.

Jet capsule is a fully customizable luxury miniature boat !
Developed by a team of talented designers in Naples, the Jet Capsule is the result of an ambitious project : that of designing a yacht that can be modular as desired. The boat has rounded lines, which suggests a smooth ride with pleasant bursts of speed. In order to fully integrate the function of personalization into its nautical creation, the designers have devised several ways to enhance the look of ship.
Its future buyers will thus have the possibility of transforming it into a nightclub, a taxi, a police car or even a family boat. Pratical and ecological, the Jet Capsule is 7meters long and 3.5 meters wide. It can reach a speed of up to 55 Km/h. it is made of 70% carbon. This sporty yacht can accomodate up to nine people to make the crossing more user-friendly. The jet Capsule is priced at 150 000$ for its basic version, going up to 255 000$ for the custom version.

The SeaBreacher, a new toy at sea. It is a semi-submersible boat, it allows you both to glide on the water and to admire the seabed. On board a shark, whale or other specimen, the driver will be able to push vehicle up to 97 km/h on water and 40 km/h underwater (this is not a submarine but it can go up to 1.5m underwater). It allows thrill seekers to perform jumps of up to 6m in height and 360° spins. The price ranges from 100 000$ to 130 000$ depending on the model


SeaBubbles is intended fot the transport of passengers by river. This boat works thanks to the hydrofoils which propels it. It is a hydrogen boat that flies on the water wihout making any noise, without producing any CO2 and without making waves. They assume that in 2050 there will be 4 billion cars, and even it they are all powered by clean energy, it will create huge traffic jams. They therefore rely on mobility on water, a natural route that has been underestimated for too long

Gliss-Speed is the first electric nautical kart ! Handy, accessible for both adults and children, fun, ecological and silent, this french innovation makes you discover a new leisure activity that is 100% fun and safe, at an affordable price. Equipped with an electric motor and a lithium battery (2h autonomy). The gliss speed can reach a maximum speed of 25 km/h so that it can be driven by anyone without any license. The Gliss Speed does not pollute, it is very quiet and produces few waves to preserve the shores.

The project began in 2009, a Nice inventor named Stéphane ROUSSON presents his revolutionnary pocket submarine focusing on unparalled maneuverability thanks to a lot of work on aerodynamics. An award-winning feature in 2011 in the United States. It is quite simply an electric mini submarine, in which the pilot and sits underwater and breathes using an oxygen cylinder. With its three meters long and its 90kg in total, it advances at more than 4km/h or 8x faster than a diver. This submarine could be used by divers looking for new remarkable sites, disabled people to dive more easily, but also scientists for archeological research.

Chill island is a motorized floating device, like a kind af deckchair, which can comfortably accomodate 2 people for a ride on the water. Its rounded and ergonomic shape accommodates two sun loungers specially developed to fit the shape of the body and allow you to easily descend into the water. At the top, adjustable palm leaves provide shade. A new way to relax on the water, fun and comfortable, it has everything to become essential.

The new bike on the water ! Everything there is easy, ergonomic, reassuring and inspires confidence. You get on the float which is very stable, you feel safe as soon as you set foot it. In front of the handlebars you can install floats that can accommodate two seated people. In use, it is completely intuitive with responsive steering and pedaling as easy as on a bike without freewheel.
Par Victor Gasquet (Spotyride

Innovation
Précédent 2021 Virtual Nautic , the Show ! SuivantSEND IT! When Hollywood get an interest...
0