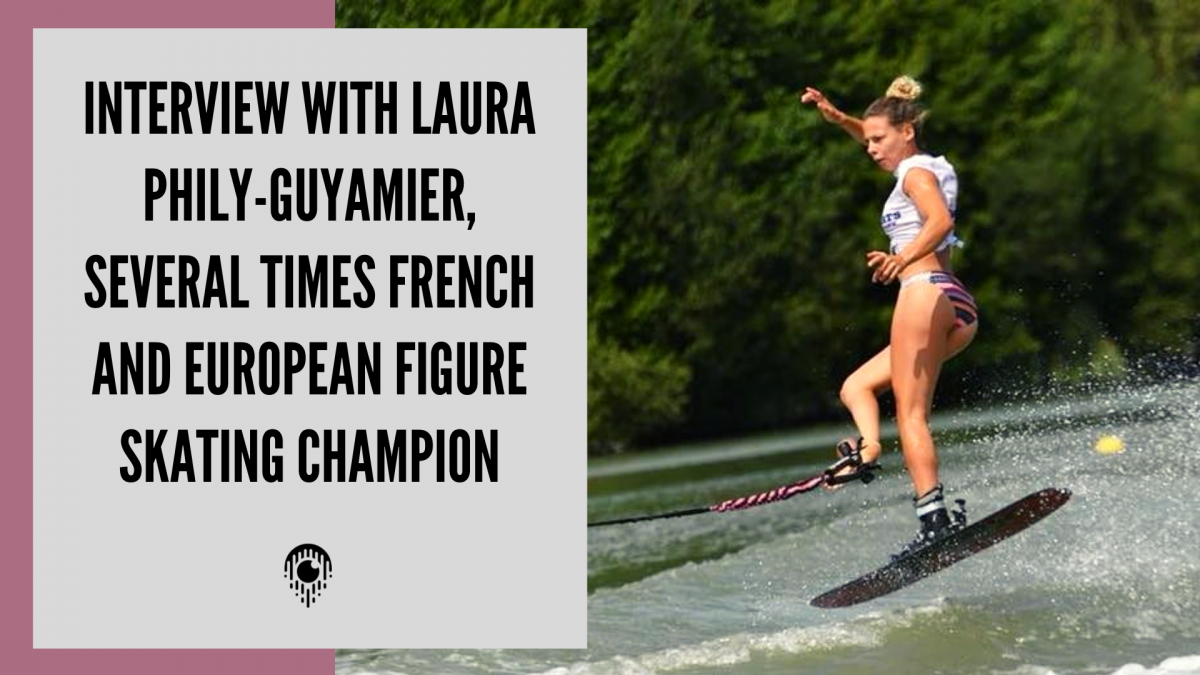 We had the chance to meet Laura Phily-Guyamier, 2021 French Figure Champion and recent double bronze medalist at the European Agrinio Championships! 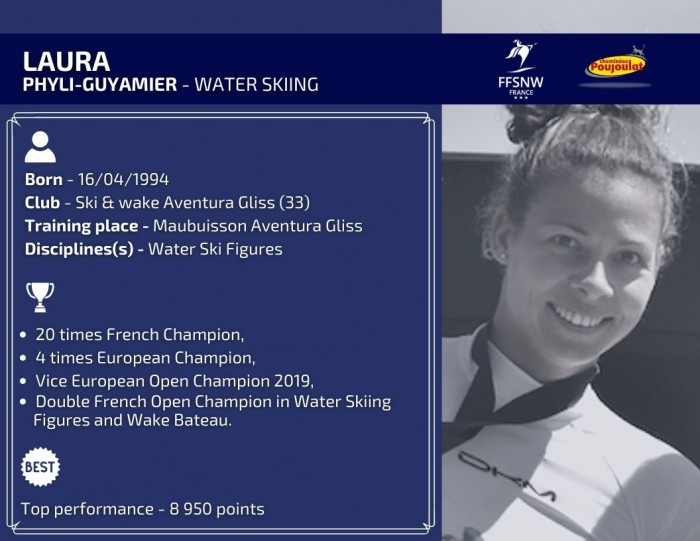 Can you tell us about your achievements?
When I was little, I was water skiing in Niort. I was spotted by Raoul Gabriel (manager of a water ski school in the Arcachon basin) when I won a training course with him which went very well at the age of 8-9 years. That's how he became my coach. From the 4th to the 3rd grade, I went to sport-study. Afterwards, I changed to surf a little bit while continuing water-skiing and then I finished my final year in another high school in Cognac in sport-study water-skiing again with Denis Garcia.
During all these years I was part of the French team. At the beginning in combined, that is to say in slalom, jump and figure, then towards my 21st birthday, I specialized in figures.
I was 20 times French champion, 14 times medallist at the European championships including 4 times gold medallist. Currently, I am ranked 7th in the world and 2nd in Europe.

What do the figures consist of?
There are 2 courses of 20 seconds to be completed, with a series of tricks.
For the first course, you have to ski on one foot with the second foot attached to the rope and for the second course, you hold the rope, more precisely the "palonier" in your hands. It's during this course that we do all the somersaults.

What made you decide to do water skiing?
It happened completely by chance after I moved to Niort. There was an open house where you could try water skiing and I never stopped.

What are your goals?
This year my goal is to have a title at the European Championships in Greece and a podium at the World Championships in Florida which will take place from October 11 to 17. At least I am aiming for the top 5.

Do you have other passions besides water skiing?
I do other sports on the side: horseback riding, alpine skiing, kitesurfing, and gym. I compete as an amateur, but it's mostly for fun.

What would be your advice for people who would like to ride at a high level?
To believe in themselves and to train, because with hard work you can achieve anything. You just have to be persistent.

Isn't it too complicated to be a professional rider today?
Yes, it is complicated to make a living out of it, but I am lucky to have a sponsor, the "Cheminées Poujoulat" who have been following me since I was 12 years old. Without them, I wouldn't have been able to continue skiing, so it's really thanks to them and my family. That's also why I created my own ski school in Maubuisson in 2018 and now in Saint-Martin since January 2021, to be able to live from it.

How do you manage to reconcile the two?
For the Maubuisson school, the first two years I was alone, my mother and my sister helped me during the summers. Since last year, I have providers and pilots who come. This allows me to train and to pilot the children of the club and the competitors so I spend less time in the boat.
Concerning my school in Saint-Martin, I also have a pilot on site. I manage from a distance everything around the structure but I don't pilot. I went there for the launch in January.

What does high level sport bring to you in the management of your companies?
First of all, the mental aspect, it's important, the fact of always wanting to perform better. This is as true in sport as in business. To succeed in increasing the activities, the quality, to challenge yourself to be always performing.

How did you manage the COVID-19 crisis?
For the school of Maubuisson, we'll say that it was good, because I had some help from the State during the winter season. In the summer, we were able to reopen everything, so I was not impacted. Without the aid, it would have been more complicated but feasible, because the high season was very positive.
On the other hand for Saint-Martin, we were very impacted, because it is mainly foreigners who come to the island, the people living there do not practice water skiing very much except that everything was closed, there was nobody. This winter, when we were there, everything was open, but there was a compelling reason, at the beginning of the summer everything was still closed, so no longer a tourist destination because we in France, we started to live normally again. As a result, we tried to develop activities on the island, we hold open days, we try to work with associations, schools, but it is not like in France, the means are not the same. Today, the health situation in Saint-Martin is more stable, but there are many regulations.

Why did you choose to open your second school in Saint-Martin?
In 2011, I went skiing there, I liked it very much and I went back several times. We are 3 partners and we seized the opportunity that there was. It's also an opportunity to have a spot to train because in France, it's cold.
We used to go to the United States a lot but we can only do water skiing there whereas in Saint Martin we can really do something else besides training.  For the development of tourism, it's great because with good conditions and facilities, competitors can come with their families. For the children or the girlfriends, it's great, there is the beach, activities to do: surfing, diving, golf...

Do you offer the same activities in Maubuisson and in Saint-Martin?
At the Maubuisson school, I offer all the activities except: slalom, jumping and towed buoy because it is forbidden on the whole lake. We find babyski, wake, wakeskate, foil, monoski, figures...
In Saint-Martin, we have 2 slaloms with ideal conditions. We offer everything, as well as figures as wakeboard, wakeskate, with also the towed buoy. There is only jump that we do not make. Except the jump that we do not make.

After, in Maubuisson, we have an associative part with a team of children all year long that we meet again at the beginning of each school year. We take part in competitions and training courses. In the summer, in July and August, it's more of a tourist activity. Otherwise, it is the regulars who come to the spot. We also welcome several times in the summer colonies that fill our days.
Whereas in Saint-Martin, it is different, it is a very tourist clientele. During the school vacations, we find many French people who come to train in good conditions to prepare for the season.

We have 2 very different clienteles between the 2 spots, in Saint-Martin, it's a lot of senior citizens who come to train in winter whereas in Maubuisson, we find more young people who come to spend a few days with their grandparents for example.

What do you want to pass on to the people who practice ?
The feeling of sliding. Whether in Maubuisson or in Saint-Martin, we have 100% success rate from the first lesson, so in general they leave happy, the children leave with their diplomas. To have fun on the water, to discover a new activity and then if they want to join the club, it's always a plus for us, to have motivated children.

According to you, what are the advantages and disadvantages of your dual status as a rider and entrepreneur?
There's never a dull moment, there are plenty of things to do and develop. The sport on the one hand brings me ideas for my structures and vice versa. Both bring me a lot.
As for the disadvantages, I would say that there is a lot of work at the same time, because the two seasons are at the same time. When I am in full competition, it is also the full season in Maubuisson and potentially the full season in Saint-Martin because the months of July/August, even if it works very well in winter, are very touristy. So the month of August is likely to be complicated, because for my 2 structures as well as for the training, it is the high season.

What's new?
Since last year, we have developed the sunset sessions. We also have a children's club which is our strong point in Maubuisson because we are the only year-round ski school with a team of children.

Who can come to the club?
There is no real age limit! At the moment we have 14 children between 6 and 15 years old.
The annual membership is accessible to all for 35 €, license included, free outfits, training courses, competitions, financial aid... We also take them to the French championships, because we are lucky enough to have mini partnerships with local merchants.
This year, we have a very big project for November or December 2021. We are currently looking for funds because we would like to bring them 8 days to the spot of Saint-Martin.

Find out more about the schools Laura runs in Maubuisson and Saint-Martin :

France
Précédent the world's biggest water park in Saudi...SuivantManta5 , Cycling on the water never be s...
0