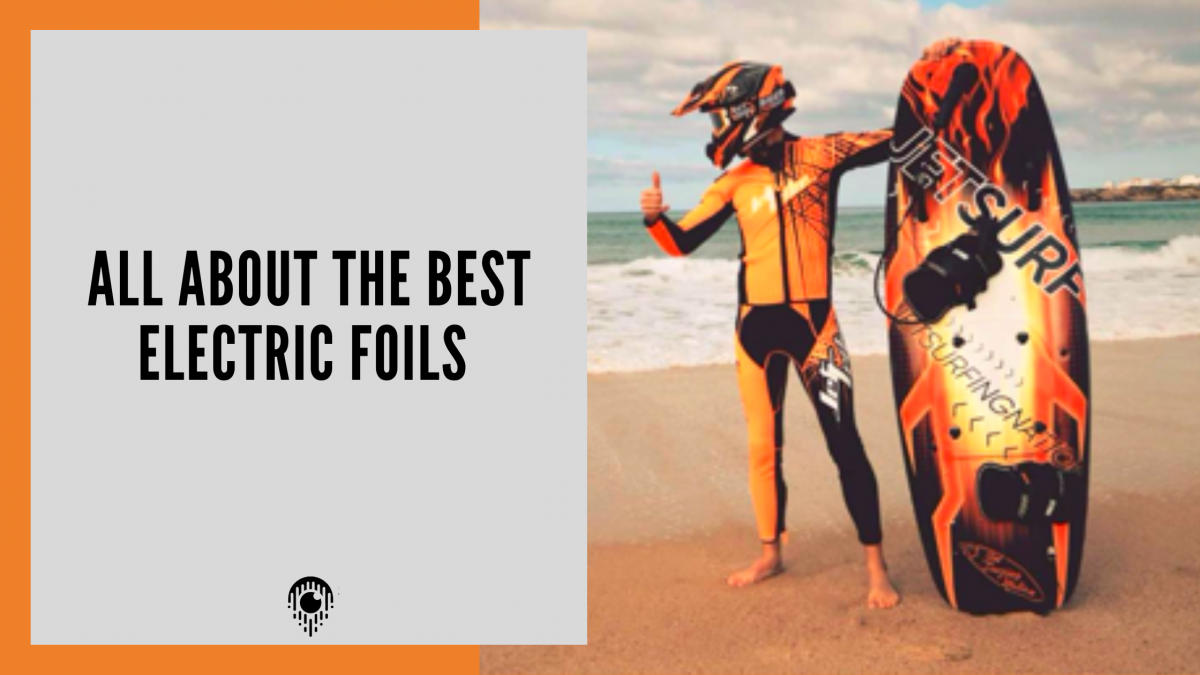 How Efoils Work and Top Electric Hydrofoils for 2021 season

There's even a good chance that, if you've been to the beach, you've seen someone in the water with these. They are called electric hydrofoils and it is an absolutely incredible activity to participate in.

The history of hydrofoils dates back to the 19th century, when Emmanuel Denis gave the idea of hydrofoils and provided the first drawing of how it might look like. The first hydrofoil boat was designed and built in 1906 by Enrico Forlanini. Frederick Baldwin, the partner of Alexander Bell, studied Forlanini’s work and worked on different designs. During his world tour of 1910-11, Alexander Bell and Baldwin met Forlanini and rode in his hydrofoil boat over Lake Maggiore. This was the first hydrofoil ever built. After that different people worked on hydrofoils and today we see much more improved versions of hydrofoils, which helps us in many ways.

You may be asking yourself, “What is a hydrofoil?” In terms of its design and how it operates, it actually pretty simple. A hydrofoil is literally a wing that attaches underneath some sort of a boat, raft or vessel. It works in the same way that the wing of an airplane works. As the vessel moves through the water, the shape and design of the wing increases water pressure on the underside of the foil and decreases it on the upper side.
As the speed increases, the water pushes the foil up. Because of their wing-like structure, the speed of the water above the foil is greater than the speed of the water passing below the foil. This difference in speed could be explained through Bernoulli's principle. When the fluid on top side of the foil passes at low speed it creates low pressure at the top of the foil and high pressure at the bottom. This phenomenon generates a lifting momentum.
Once the vessel reaches a certain speed, it lifts out of the water, just the same as an airplane. If you have ever been out on a lake, there's a good possibility that you have seen one of these being pulled behind a boat at some point.
While fun to use, the one difficulty has always been the fact that it required an external force to give it motion. Some people learn the foil pumping techniques or use foils in the big waves like foil pioneers such as Laird Hamilton. Foils became also very popular in kite surfing and wing foiling.
Few years ago though, with the progress in marine battery technology, the idea of an electric motor hydrofoil board was crossing the minds of a few people. If propellers could push a boat quickly through the water, why couldn't the same principle be applied to the board? It would just need to be light enough to not weigh the board down, but powerful enough to give the board lift. Designs were finally made to what we see today.
The design itself is pretty simple in principle. The propulsion unit is attached to the board usually on a long 75 cm mast. Also found within the board is a power marine battery. These durable and powerful batteries have made the top speeds much faster than ever reaching up to 50km/h and have also extended ride times for the users up to 2 hours.  This is the main advantage of efoils compared to traditional electric jetboards that have very limited riding time of around 30 minutes due to bigger drag and more powerful motor needed.

Finally though, the most important component of the entire unit would be the hydro wings.. Each foil comes with two wings usually made from carbon fiber which can serve different purposes. The front wing is the most important wing in the design. It is this wing which generates the lift necessary to bring the board off the surface of the water.
Also, its placement is directly in front of the propeller. This is incredibly important because it minimizes drag and allows for the maximum amount of lift possible with the least amount of power needed. In the boards like Fliteboard the motor is aligned with the wings which makes the riding really smooth and stable. If the motor is higher than the wings it would create instability which ultimately makes the board more difficult to ride. However the difference is not that big so both models are very popular among pro riders.
The second wing is a smaller wing that is known as the stabilizer. Positioned to the rear and just below the propeller, this removable wing can be used to generate an upward angle, allowing the rider to actually jump out of the water if necessary.
Another noteworthy fact about the wings is that they come in a variety of sizes that will suit the style of the rider. A good illustration would be with surfboards. There are a variety of sizes of surfboards, suited for numerous purposes. Large surfboards are typically used by beginners and those who are simply looking for a relaxing time riding the waves. Smaller boards, however, are used by professionals and can maneuver much more quickly. The same thing is true for the sizes of wings that hydrofoil riders can equip. Large wings produce more lift and are easier to maneuver. However, they do not turn quickly, nor are they high-performing. Smaller wings require a lot more effort and strength to control. But, they allow for much faster speeds in the water and much tighter turns.
The size of the board itself matters a lot. A bigger size board or an inflatable board is very floatable and easy for a newbie to learn, you can even stand up on the board like with eTakuma without moving. However a smaller board gives you much more freedom to carve and do the sharp turns and jumps which is important for professional riders. There are also new systems on the market like eWave that combines the jetboard and efoil two in one using a hydrofoil attachment.
New professional efoils like Fliteboard series 2 Ultra are using the straps to help pro rides turn faster and jump. There are also additional features like folding propellers from Liftfoils and the new gliding prop  from Fliteboard that allow riders use efoil even without power in the surf.
It goes without saying all efoils are also equipped with a wireless remote control that lets you set the speed and a lot of safety features that turn off the motor instantly when you fall of the board. The efoils are surprisingly easy to learn and most beginners start flying during the first 20 minutes.
Overall, the electric hydrofoils are quickly becoming a very popular way to enjoy aquatic activities. More and more companies are introducing the new models in this exciting new industry such as Fliteboard, Liftfoils, Waydoo, Getfoil, eTakuma, Powerfoil, Ewave, Mantafoil just to name a few. Each of these companies offer variations and customizations of the same type of machine and you can check detailed review of every model on our Jetsurf Nation Channel. In the end though, it's more about how unique this technology is an how it is revolutionizing an entire industry. If you're thinking about getting into the sport, do some research and dive in. Soon, you'll be enjoying some of the most fun a person can have in the water.

Foto credit – jetsurfingnation.com
If you want to learn more about each board from our list, make sure to check other videos on our channel where we meet the developers and ride and tesPhotot their boards together ! Thank you for watching, and don’t forget to subscribe to Jetsurfingnation!

Innovation
Previous SEND IT! When Hollywood get an interest...NextThe Albatross: the Odyssey of the waterm...
0